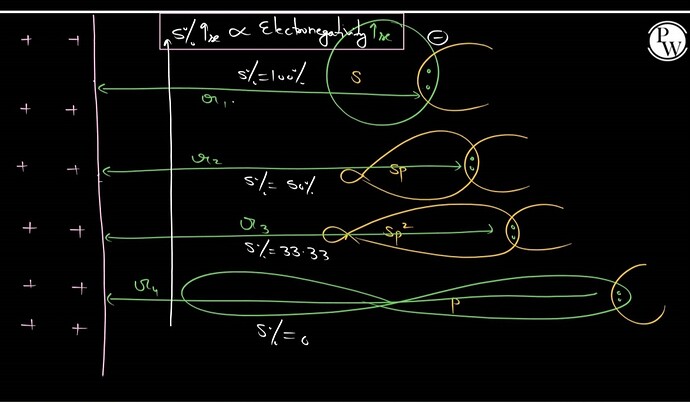 Electrongeativity of carbon atom depends on the hybidisation of the carbon atom. Since, s-electrons are more strongly attracted by the nucleus than p-electons, thus, electronegativity increases with increase in s-character of the hybridised orbital .

Now an s orbital being spherical is more close to nucleus, as it is attracted from all the possible directions by the nucleus. (That’s why we say s orbital is said to be the most penetrating). Thus a hybrid orbital having more s-character will be more close to the nucleus and thus, more electronegative.

Also, more the %s character in the hybrid orbitals, the stronger are the bonds formed. There are two reasons that a hybrid orbital is better than the parent atoms :

1.) It is better than the parent s because it is directional unlike s-orbital.

2.) It is better than the parent p because it has lower energy than p-orbital.

What we are concerned with is that more is the s-character introduced in the parent p-orbital, better will be the hybrid orbital formed and stronger will be the bonds. Thus, increase in %s character makes stronger bonds.